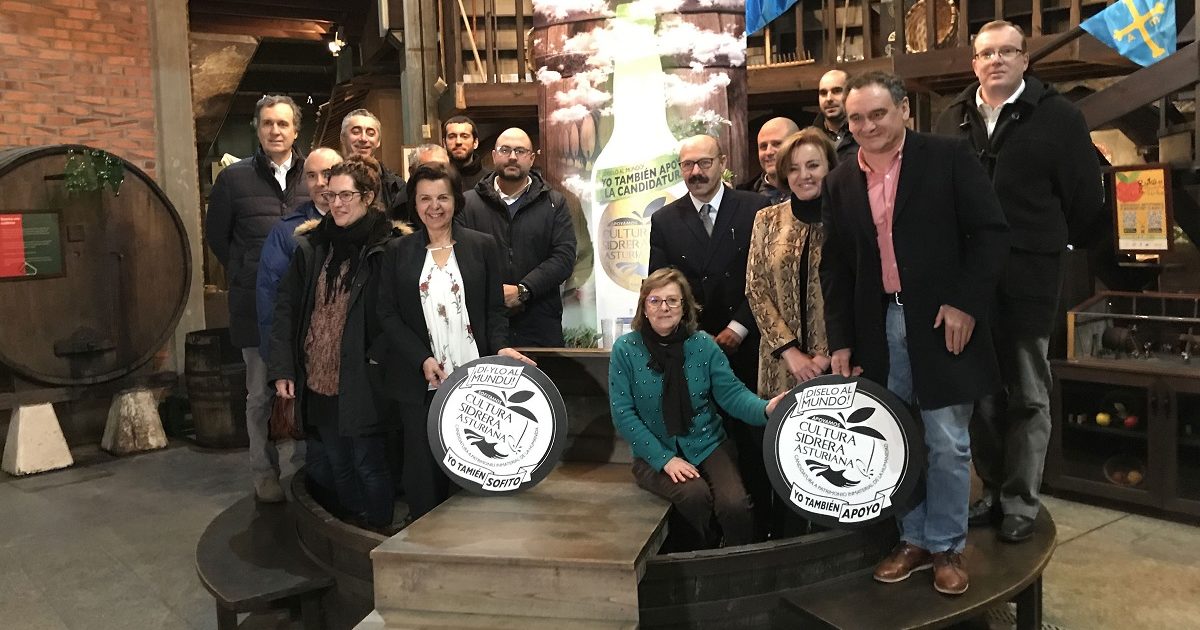 The intention is to obtain the maximum social support to be recognized as Intangible Cultural Heritage of Humanity; However, its presentation will be ‘possibly’ until next year because in 2019 the list of proposals from the Spanish state, previous step, is closed

LA SIDRA.- The Ministry of Rural Development and Natural Resources has today called on the Asturian society to get involved in supporting the candidacy of the Asturian Sidrera Culture for Intangible Cultural Heritage of Humanity of Unesco through various activities that will be put up this week. The participation of the citizens will be promoted through an extensive network of ambassadors of the cider culture, whose work will be to support and manage the dissemination of the proposal in different areas. Among other functions, they will assume the management of the book of signatures of support in different points of the territory and in the web www.culturasidreraasturiana.com. They will also be in charge of coordinating with associations or entities for the collection of rubrics, the distribution of badges in catering establishments and shops, and the dissemination of informative and promotional materials.

We recall that the process for the formation of the candidacy has been paralyzed in different stages and everything indicates that now it has taken force to present itself, possibly, in 2020. It should be noted that, in order to reach UNESCO, the candidacy must have been accepted before as such by the Ministry of Culture. That is, it has to become part of the list of assets that Spain presents to the aforementioned UN body. Step that has not yet occurred. This has been explained by the Minister of Rural Development, María Jesús Álvarez, in a subsequent interview on the Asturian public radio. He pointed out that the list of candidacy admissions “is closed” and that until next year it will not be opened. In fact, one of the intentions with respect to the candidacy was to be able to present it in the spring of 2019; At least that is how it was said in the past ‘Sidrafórum’ made -also- at the Nava Cider Museum on July 4 and attended by, among others, the now former general director of Rural Development, Jesús Casas. Given this new obstacle, we must take advantage. Hence, the counselor said that now has more time than expected to continue with the preparation of the application, and especially to seek the maximum support among the Asturian society.

The presentation ceremony, in addition to the counselor, was attended by the mayor of Nava, Juan Cañal; the general directors of Rural Development and Heritage, María Jesús Aguilar and Otilia Requejo; as well as members of the Steering Committee. The program presented “will allow the participation of all Asturians residing in the 78 councils and anywhere in the world, will be led by the ambassadors of the candidacy of the Asturian Sidrera Culture who are the ones who have to give support and manage the dissemination of the candidacy both in their territory and in the professional field to which they belong “said María Jesús Álvarez and added:” managing a book of signatures that we want to reach all corners of our territory; coordinating with other associations, with other entities, all kinds of actions in favor of the candidacy; delivering badges, stickers that can be placed in visible places of all catering establishments or shops. Also, distributing informative and promotional materials; or collaborating in the implementation of the candidacy in each of the municipalities. ”

Next Thursday will be held a great espicha in which it will begin to spread who are the ambassadors to whom they will deliver the accreditations and in which also will be present municipal representatives of the Asturian councils and responsible of the government delivering those diplomas. In addition, on the 29th the support campaign will be launched in all the Asturian councils, which will run until March 15. The candidacy will also have a projection at the Fitur fair, which will be held in Madrid from the 23rd to the 27th of this month.